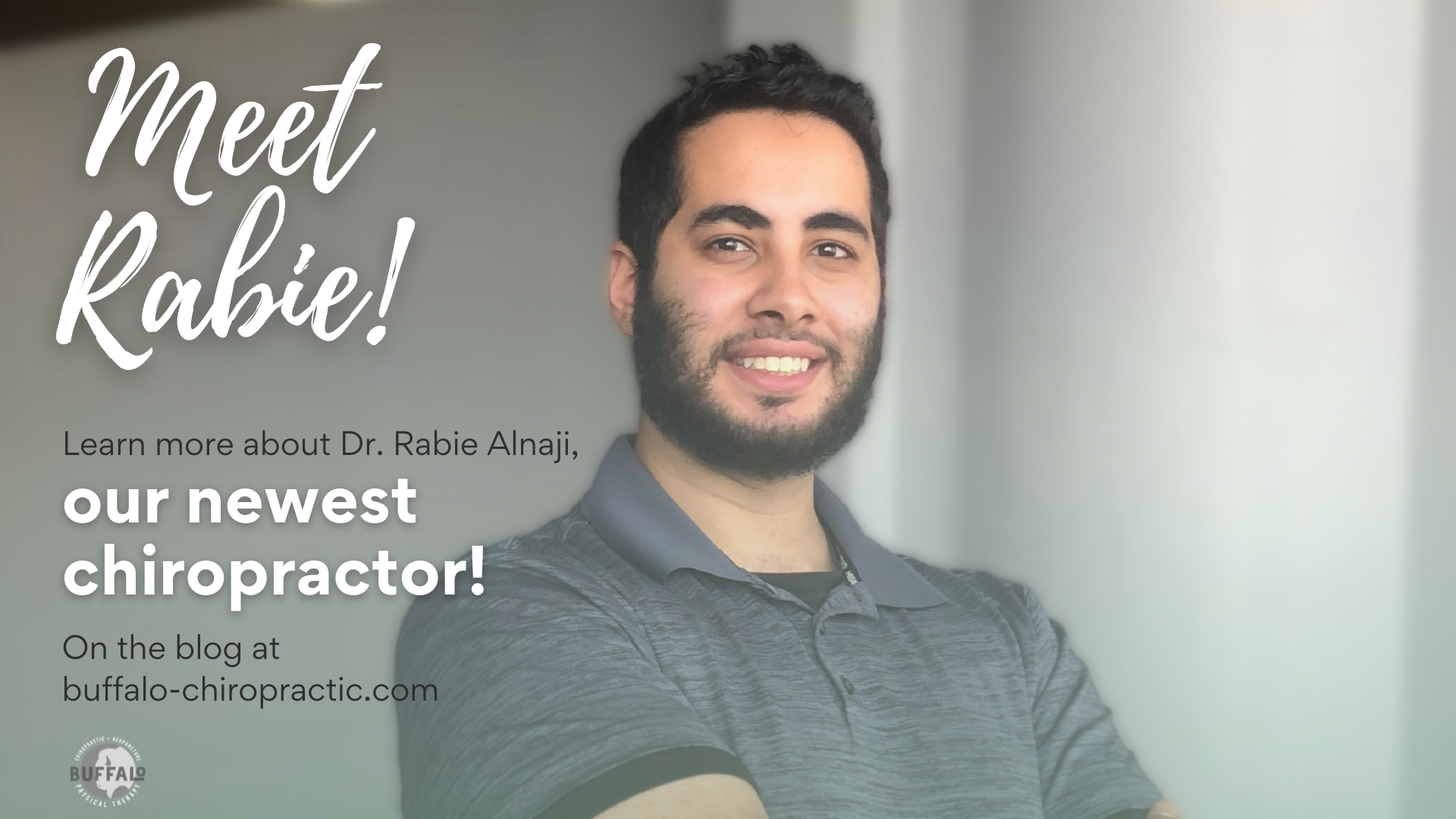 Dr. Rabie Alnaji is the latest addition to the Buffalo Chiropractic, Acupuncture & Physical Therapy PLLC family! He’s a board-certified chiropractor in his 3rd year in the field and joining us at our North Buffalo location. We sat down with Rabie to discuss his interest in chiropractic, love of cars, and more!

Originally following in the footsteps of his older brothers, Dr. Alnaji started his career pursuing his MD in biomedical sciences at University at Buffalo. However, after seeing the rigorous process that led to a more distant and formal relationship with patients, he knew his interests were with something a little more hands-on.

Dr. Alnaji began in biomedical sciences pursuing his MD at University of Buffalo, but after seeing his older brothers work through the rigorous studying process that lead to a more distant formal relationship with patients, he knew his interests were with something a little more hands-on. “I was looking at their material and saw a lot of objective stuff, like testing- not a lot of treatment other than medications or emergency services,” he said.

He also saw his mom, who moved here from Jordan when Rabie was 2, taking prescription medications that helped her condition but had adverse side effects like exhaustion and fatigue.“She wouldn’t be able to do certain things because of the side effects, and that’s not something I wanted,” he said. Noticing how these medications were affecting the people he loved, he decided to look more into conservative rehab techniques like chiropractic and physical therapy.

Inspired by “the bigger impact” that chiropractic had on patients’ lives, Dr. Alnaji completed his board certification and received his degree from the New York Chiropractic College in 2019. In doing so he continued a family tradition of medical care. His 2 older brothers (one in neurointensive care at Catholic Health, another finishing his medical degree), 2 older sisters (both chiropractors) and younger brother studying biotechnology in the medical field followed in the footsteps of the eldest. “Medical is very hard they say, but for our family, it was just another class,” he said. “We had the capability… if you’re able to do it, do it.”

Having been practicing for almost 3 years, Dr. Alnaji feels great about his decision to become a chiropractor. “I feel better being in the medical field in the fact that I can feel what’s going on with the muscles, where the pain is specifically, I’m actually touching the patient,” he said. He also enjoys the mental aspect of the job, comparing chiropractic to a puzzle. “You do a couple adjustments and see if there’s something you missed… It’s a big puzzle. The human body is the most interactive puzzle.”

Outside of work, Rabie enjoys spending time with his wife and newborn son of 5 months old- “he’s my pride and joy”- and playing video games when he can. His favorite part of living in Buffalo is exploring all the things to do in the area, like going out to restaurants or Helium Comedy Club to relax. “There’s always something around here,” he said. “There’s a ton to do. It’s such a lively area.”

He also enjoys an almost-obsolete pastime- fixing cars. He started with a 2002 Mercury Cougar in college, fixed it up to tip-top shape, and sold it to another owner. He continued this fix-and-sell hobby to get through college and now has his dream car, a 2015 Challenger to work on. “It’s a pain in the butt because as soon as you fix something, something else isn’t perfect,” he said. He even compared fixing cars to his second love, chiropractic. “It’s the same thing, like a puzzle. [You see] what’s working, what’s not working, and you figure it out and get to see the results.

High-quality, professional chiropractic services are just a call away! Come see Dr. Rabie at our NEW North Buffalo location and get the care you deserve. Schedule now!